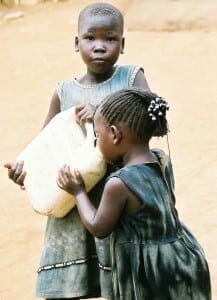 Thousands of West African girls as young as four years old have been offered to the gods as atonement for some offense committed by a relative.  Trokosi – which literally means ‘slave wives of the gods’ – are part of a three hundred year tradition in the Upper Volta region that encompasses Ghana, Nigeria, Benin, and Togo.  Until the eighteenth century, Fetish Priests accepted livestock as offerings by families who were fearful of retribution by the gods.  But then the priests decided a young virgin would be more useful for domestic and sexual purposes.

A slave’s term of service is supposed to last from three to five years, depending on the nature of the sin that is being atoned for.  However, most families of Trokosi cannot afford the price required to buy their daughters back.  They are also fearful of the gods’ displeasure.  If a priest dies, the woman becomes the property of his successor.  But if the girl dies without her family redeeming her, they must replace her with another virgin.  The cycle can continue for generations.

Through the efforts of a private, non-profit agency called International Needs Ghana, many shrines have now stopped the practice of Trokosi and 2,900 women have been freed and rehabilitated.  The Anti-Slavery Society has also succeeded in purchasing the freedom of over 500 slave girls.  In 1998 Ghana passed a law banning the practice.  However, several thousand girls still remain in slavery. The law is hard to enforce.  Some people argue that it is a part of their culture.

Women in the Window International’s mission is to see women in developing nations and dire situations, where oppression and injustices prevail, become beautifully equipped and wholly empowered by Grace.  This disturbing factual account from West Africa helps you to better understand why we do what we do.

Pray with us that the Grace of our Lord Jesus Christ will abound in stopping this despicable evil and result in many women coming to know Christ as Savior, winning their homes and communities to Him.